Up above is the two track reel to reel machine I bought a few months ago with my pals Liam and Dan of the Ninetree Stumblers. Ever since, I’ve been learning how to use it, and collaborating with my good friend Anna Kissell on setting up a musical collective called ‘Bare Bones’ centred around our new DIY music studio.

The idea behind getting the reel to reel and setting up the studio is to learn to produce our own music, so that we aren’t reliant on other people, or expensive studios and producers. Sustainable production of any art form is tricky. I have procrastinated for years about making a solo album, mostly because I didn’t have the money to make something professional, instead preferring to rely on home-made demos. However, recently, I’ve decided to sit down and teach myself a few basic things about music production so that eventually I can produce more professional sounding music, and have control over the sound.

In fact, it wasn’t a case of sitting down at all, but a case of calling people up and asking advice, as well as begging and borrowing equipment from band-mates and friends.

I want to blog about the making of this album, and explain the technical set-up of all the equipment, so that this can function as a ‘dummy’s guide’ for anyone who wants to do something similar.

We also want to use the studio as a learning space where we can run workshops to teach other people (especially other women) how to record themselves. Music production can be very intimidating, especially for women, who are not socialised to think of themselves as ‘techy’. I’m discovering that a key part of music production is having the confidence to trust your own ears, rather than believing there to be some mystical method of making things sound better that you just can’t fathom.

So, down to the nuts and bolts:

We bought a two track Fostex E2 reel to reel machine. Two track reel to reels are usually used to master tracks as they only take a left and right channel from the mixer. This means that once you have blended the sounds from all the different microphones in the mixer, you can no longer alter anything that’s been recorded onto the tape. The beauty of this is that you can do all your mixing with microphone placement if you want to keep things really simple.

Our first microphone is the ‘Josephine’ model from Ear Trumpet Labs

It is a condenser mic (which means it will record the ambient sound in the room- rather than only what is directly in front of it) and has a cardioid (heart shaped) pattern, which basically means that it records on one side of the microphone.

We are also borrowing another condenser microphone from our friend Tom Fox, who plays sousaphone in my band. This one can alternate between a cardioid, a figure of eight, or a 360° pattern.

Liam recently showed me how to arrange the mics in a midside pattern. I don’t really understand the physics of this (yet) but it seems to produce a lovely, clear sound. You put the cardioid mic in front of the musicians, and place the figure of eight microphone at a 90° angle to it, and directly below. Here is a picture of the set up from when we were recording a Ninetree Stumblers EP yesterday:

With a band like this, where all the instruments have a natural blended level, two good microphones are sufficient (even one would do) to produce a nice sound.

However, my own band’s set-up is not so simple. We have quiet instruments and quiet vocals as the lead, and then have some really hefty instruments as back-up, in the form of double bass, sousaphone, and drum kit. So how to get all these instruments in one room and still produce a good sound? I experimented with making a screen, that can function as a vocal booth when placed beside an alcove. Luckily, the room has a couple of nice alcoves, so it worked well.

I made the screen from a simple frame made of lengths of whitewood (which is very cheap and soft, and easy to saw). I also added some hinged legs so that it can be propped up: 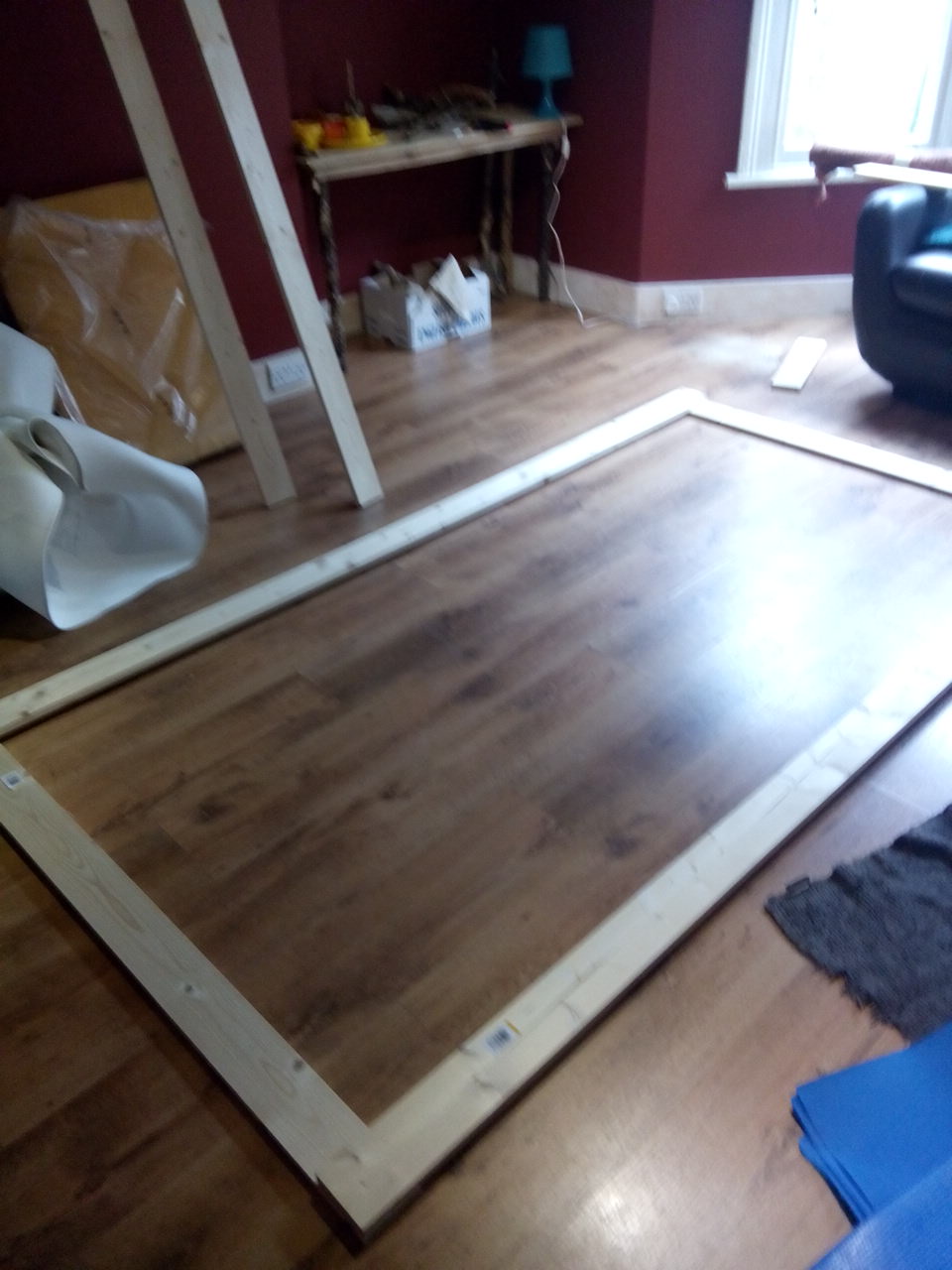 I then tacked a couple of layers of fabric onto the screen: 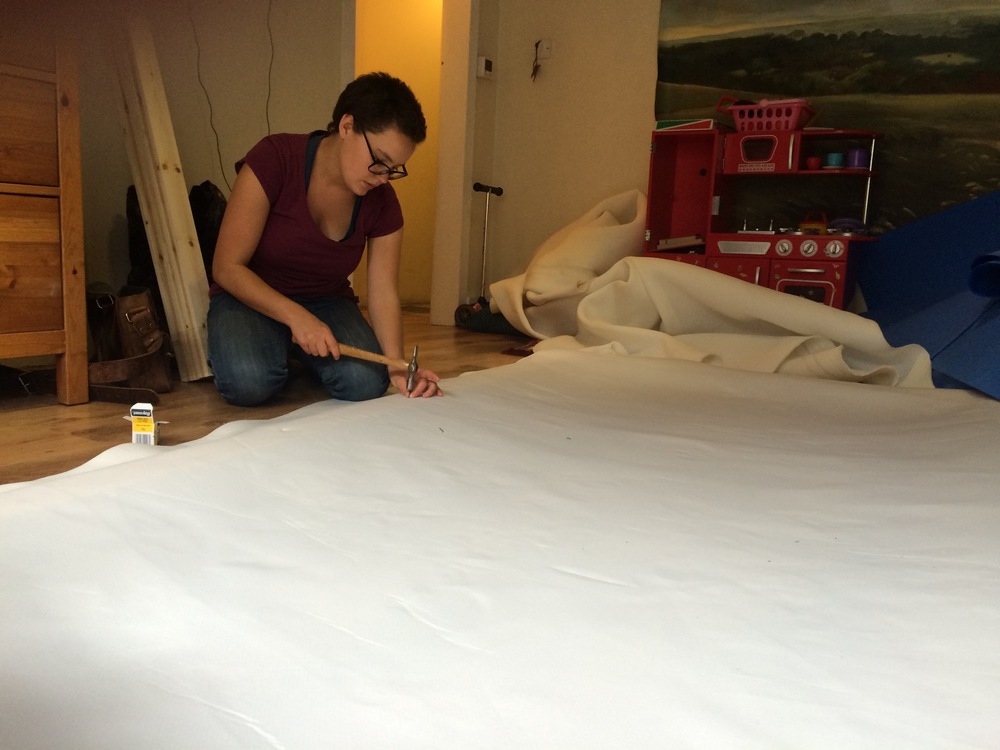 …and hey presto, we had ourselves a vocal booth, of sorts:

When we recorded, we discovered that the best way was for me and Anna to be behind the screen with the Josephine (cardioid) mic and for the 360° mic to go out in the centre of the room, recording the drums, bass, and sousaphone.

This means that there was also the need for an amp or headphones coming from the mixer so that the rest of the band could hear what I was playing. We experimented with both, depending on whether the song suited an amped sound or not.

As this is already a very long post, I will write a separate one at some point about the detailed wiring up of the reel to reel and the mixers. For now, here is a lovely diagram that Gary drew. This set-up requires two mixers, so that you can record into the reel to reel and directly out to the laptop as you are playing:

So, I hope that’s given you some insight into the mechanics of recording, if it’s new to you. Please ask questions if anything is unclear!

Anna and I will be sharing more about what we’re doing and learning soon. The studio is now available for recording and rehearsal. Get in touch for more details on: thebarebonescollective@gmail.com.

And I haven’t even mentioned yet how the recording of my album is going! We are almost done, and we think the tracks are sounding great. We have two tracks left to record. One of these will be a collaboration with members of the Island Folk Choir, which I am very excited about!

So I’ll leave you with a picture of Gary and Tom, having a lovely time in the studio: 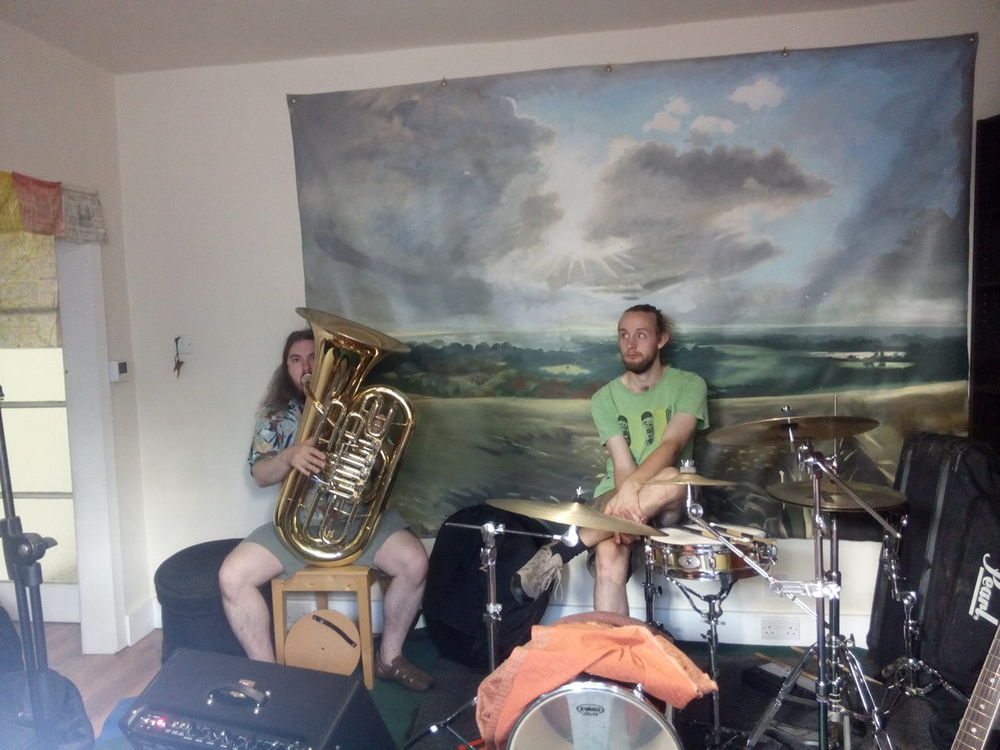 …Oh go on then, as a reward for making it to the end of this epic post, here is a sneak preview of one of the new recordings:

One thought on “Journey into Analogue Music Production: Episode 1”