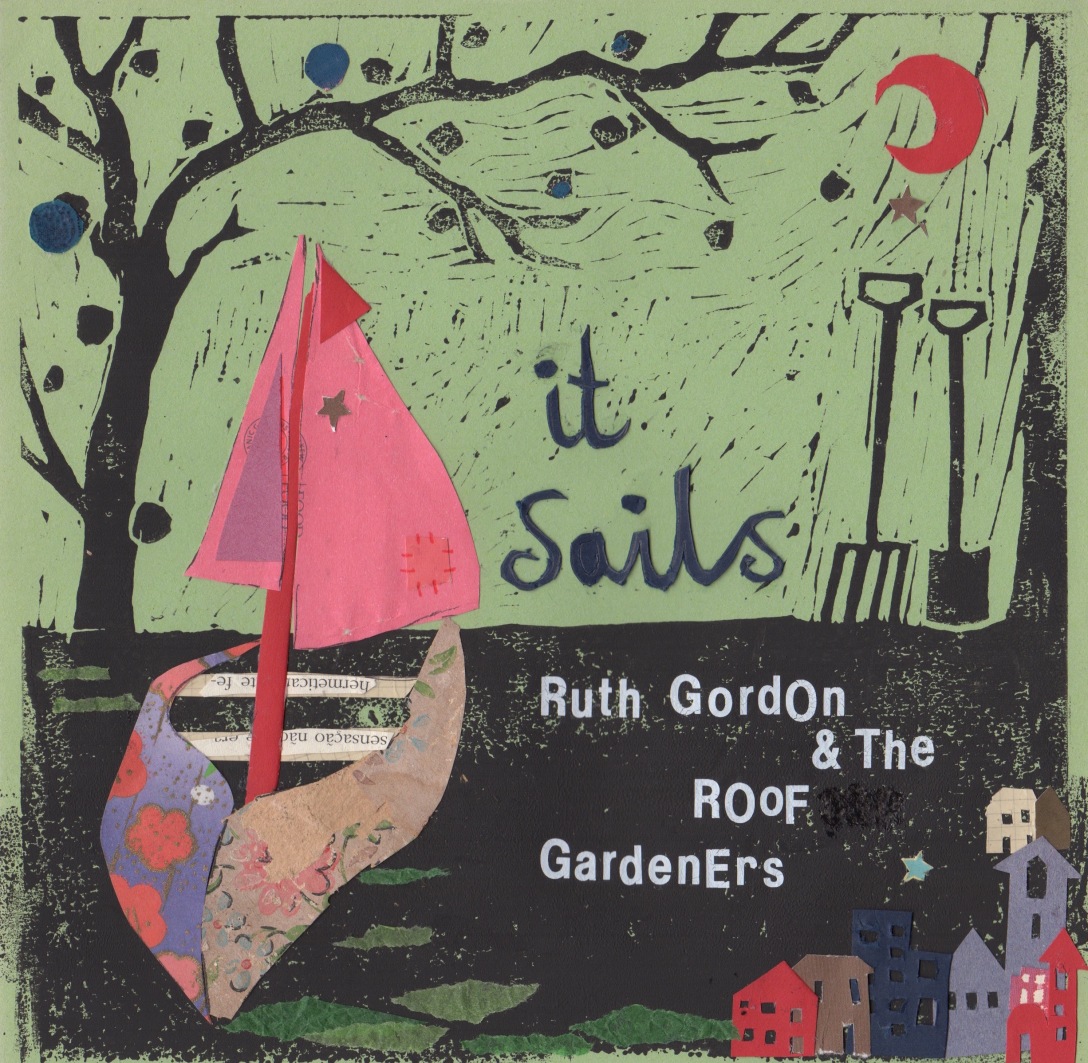 Front Cover for ‘It Sails’. Artwork by Rose Codner.

This is a very exciting week as my debut album ‘It Sails’ is finally ready to be released! It feels like this has taken absolutely ages to get to this point. And it has. Probably about three years.

It was a lot of fun recording it with my pals ‘The Roof Gardeners’ (AKA Anna Kissell, Gary Rendle, Tom Fox, and Rory Smith). We recorded some of it at a friend’s house and some at Barebones studio, the new analogue recording studio that Anna Kissell and I have set up together. I then mixed it myself, adding lots of sounds I have found and treasured over the past few years. Then it was mastered at Ill Spectre Productions by Sam Wisternoff. I like the way it sounds, and I hope you will too.

The album launch is this week, on Saturday at Purple Patch, a small farm in St Werburghs, Bristol, run by my friends Jona and Mary Conway. It’s going to be a really nice event, with a bonfire, carved lanterns, food and local booze, and some friends of mine playing: Liam Kirby of the Ninetree Stumblers (solo) and The Woodlice (led by Jet McDonald, playing Ace-Punk-Pop-Folk). Then we will play a set with our full band. And there will be lots of extra dancing and merriment after the music.

Alongside my album, I will also be releasing something that is very close to my heart. ‘Thirty Birds’ is a project that I have been working on over the past couple of years in collaboration with Naomi Millner. Naomi is a writer (and academic, and activist, and general superwoman) who is especially interested in folktales, and in the relation between music and story. We decided to collaborate on a story she had written called ‘Thirty Birds’, with me creating music to accompany her narration.

It is a retelling of a Sufi folktale called The Conference of the Birds and centres around a mysterious beast called the ‘Simurgh’. The ‘Simurgh’ is an Iranian benevolent mythical flying creature. It is sometimes equated with other mythological birds such as the Griffin, or Phoenix. In Persian, ‘Simurgh’ also means ‘Thirty Birds’ from ‘Si’ (thirty) and ‘Murgh’ (birds).

The story is set in the Kingdom of the Birds and follows the journey of a group of birds who have lost their King and are desperately searching for a leader. They decide to go on a journey and eventually meet the Simurgh.

I love Naomi’s retelling very much as it is a hymn to the power of community, and of regaining our own lost power. It has a very strong feminist and anarchistic message as the moral of the story is that we don’t really need a King, as we can all find our own ‘King’ within ourselves, and within our communities.

I’ve been tinkering away on writing and recording music for this story for the past couple of years, really with a view to performing it as a live and ever-changing improvised piece with a group of musicians. We did perform it at the Orkney solstice festival this summer, which was a beautiful experience. I had made the recording as more of a guide to prompt the musicians who perform it live but we thought it would be nice to release it as a recorded version too.

I am giving it a digital release slightly ahead of the album launch as it is a special project that deserves its own attention. So, while it will be included on ‘It Sails’ (as a double CD package), I’ve also uploaded it for listening and downloading on its own.

So, thanks Naomi for your wondrous storytelling. It’s been a real privilege to write music for a story, and I look forward to more of these story-music collaborations in the future.

You can listen to Thirty Birds in its entirety (it’s about 20 minutes long) below or you can wait until Saturday and buy both It Sails and Thirty Birds as a double album at the launch.

I look forward to seeing you all on Saturday. The Facebook event is here. It’s also combining as a double birthday party for Jona and I, who share a birthday week. And I can’t think of anything I’d rather do on my 32nd birthday than finally get round to releasing some of my own music.